The back contains some of the biggest and potentially strongest muscles in the body. But you don’t need a gym filled with Olympic bars, weights, and a pull-up bar to get in a great back workout. In fact, you can do it with nothing more than a set of resistance loop bands and your own body weight.

In this article, we take you through a hardcore back workout designed to add strength and muscle to the lats, trapezius, and rhomboids. It will also help you to achieve that much sought- after v-taper which is the sign of a muscular, athletic upper body.

For some of the exercises in this workout, you will need to find a location where you can anchor the loop band above your head. This will allow you to extend the lats completely on pull-down moves.

This workout features a series of supersets. That means that you will need to set up the bands for both exercises before you begin so as to eliminate downtime between the exercises. You should also set up the next weight band up in color for each exercise to allow for your heavier second and third sets.* Of course, you can also combine different colored bands to increase the resistance.

For your first superset, you will need to have bands set up at both a high anchor point and one that is at about waist height (just one band is needed for this exercise).

Find an anchor point that is at least a foot above your head and anchor two loop bands so that they are they are about eighteen inches further out than your shoulders on each side.

Now reach up to grab the bands, facing toward the anchor point. Row them down by bringing the elbows down and back Feel for an intense squeeze between your shoulder blades on each repetition.

You will be supersetting this exercise with a low row. 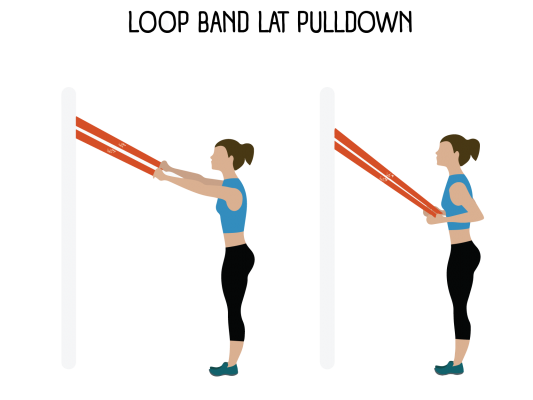 Move to the position of the waist anchored band. Stand about two feet in front of the anchor point and grab one end of the band in each hand with an overhand grip. In the start position, the band should be fully extended (if it isn’t, move further back).

Now row the band into your waist. Be sure to keep the elbows in at your sides. Concentrate on extending out the shoulder blades and then bringing them back together on each rep.
Perform 20 reps on this exercise.

Rest for 60 seconds and then go to your second superset. This time you want to use the next weight band color up in resistance. On this set you want to achieve 10 slow, full reps on both the lat pulldown and the row.

Your fourth and final set will see you go back to your original band colors and do 20 reps. This time, however, you will do the reps as fast as possible. Do not go to full extension on these reps. The partial range of motion will keep tension on the muscle the whole time. 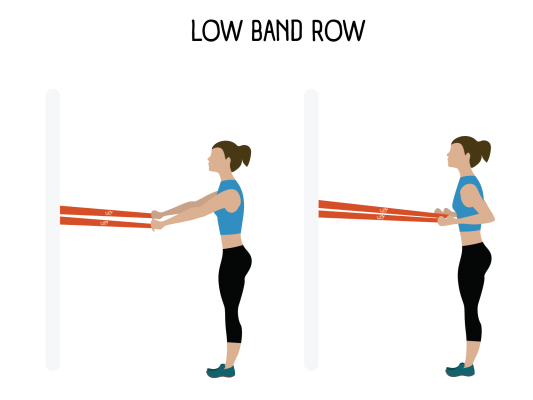 For this exercise, you will want to anchor a loop band at the height of your collar bone. Stand back about two feet from the anchor point, facing towards it. Grab an end of the band with an overhand grip.

Now, with your elbows held high, row the band to the top of your chest. This time your elbows should move outward and back. Think about pulling the shoulder blades together as you contract on every rep.

Do not mistake this exercise for the face pull, which targets your traps and deltoids. You are not pulling to your face but rather to your chest.

Perform 20 reps on this move.

Superset this exercise with… 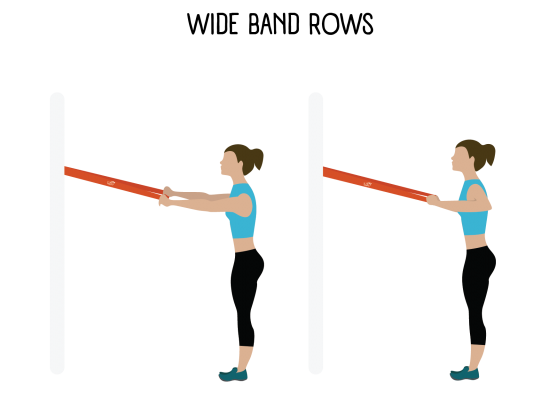 Set up a band on a low anchor point and grab the end of the band with one hand in a neutral grip. Step back until the band is fully stretched. Now bend down as if you were about to start a lawnmower, resting your free hand your knee. In the start position, you want your lats on the pulling side to be fully stretched.

Keep your chin up and your chest out as you row the band into your ribcage. Start with your hand in a neutral position (thumb up) and then, as you row, twist it so that you are in a palms up position at the fully contracted point.

Follow the same rep scheme as for the last superset. That means 20 reps on each move on your first set. You then increase the resistance for two sets of 10 reps and finish with a fast, partial range of movement set of 20 reps. Your rest between supersets is 60 seconds. 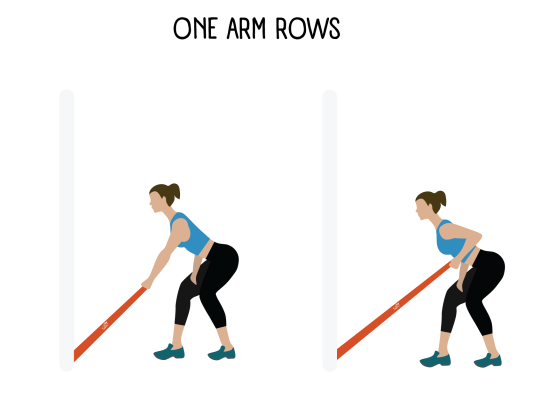 Your last exercise in this high-intensity band back workout is a straight arm pulldown to really isolate and contract the lats. For this one you will want to use the same high anchor point that you used on your first exercise. However, this time you will only be using a single band.

Stand about three feet back from the anchor point facing towards it. Now grab the sides of the band so that your arms are extended a little below shoulder height and are straight.

The movement involves bringing the arms down to the sides without bending at the elbows. The only movement will be through the shoulder joint. However, the entire action should be initiated by the lats. Make sure that you feel them working as you bring your arms down and back.

Use the same rep structure as on your previous sets; 20 reps on the first set, then an increased resistance for two sets of 10 reps and finishing with the original resistance for a final set of 20 reps. 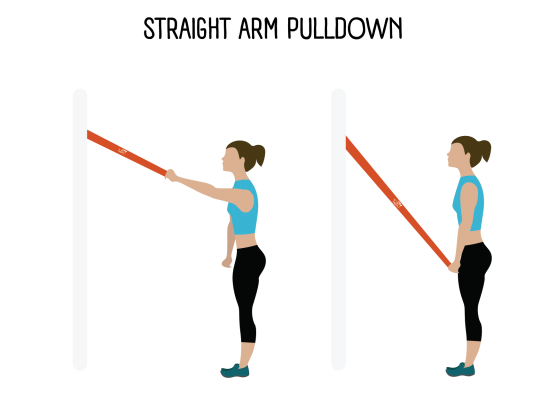 For workouts like this where you are doing supersets and working between band colors as you go from set to set, it would really help to buy two sets of bands, so that you have two of every color. With Fit Simplify bands being so well priced, this is a realistic option!