Think you need to be lifting the heavy iron in order to sculpt huge, striated upper arms?

Think again. Pull up bands, with their ability to provide graduated tension and resistance through both the positive and negative phases of the movement, have the features you need to hammer your biceps and triceps into submission. Throw in the versatility factor and resistance loop bands will allow you get in a great arm session anytime, anywhere.

In this article, we present you with a twenty-minute biceps and triceps routine that will add strength, size, and definition to your arms no matter where you happen to be.

The upper arms consist of two distinct muscle groups; the biceps at the front and the triceps at the back. As the name suggests, the biceps consist of two muscles, which are referred to as the long and short head. These two muscles work together to contract the bicep, pulling the forearm up and rotating it outward. the triceps is a three-headed muscle. These are known as the long, lateral and medial heads. The main function of the triceps is the extension at the elbow. The triceps account for two thirds the size of the upper arm.

Anchor your loop band above your head and grab it with an overhand grip with your arms at the level of your sternum. Step back from the anchor point a couple of inches and bend at the waist so that your torso is at about a 45-degree angle to the floor.

Now straighten your arm behind you down and back to perform a triceps pushdown. Keep your elbows in at your sides as you perform this move. In the fully extended position, your hands should be slightly behind your body.

For your first set, do 20 reps. Then move directly to the band curl which will be super set with the angled triceps pushdown (that means no rest whatsoever between sets).

For the band curl, you will need to anchor the band in a low position. Grab the sides of the band with an underhand grip and step back about two feet from the anchor point. With your elbows in at your sides, curl the band up to a full contract biceps position so that it comes to your shoulder level. Squeeze the biceps as hard as you can in the fully contracted position and then slowly return to the start position. The negative part of the exercise (returning the band to the start position) should take twice as long as the positive part (lifting the band).

After your first super set, go to a slightly higher resistance on both exercises and perform two sets of 10 on each exercise. Finally, go back to the original band resistance and do a final set on each move of 15 reps. These reps should be done in a faster pumping motion while ensuring that you still maintain good form. 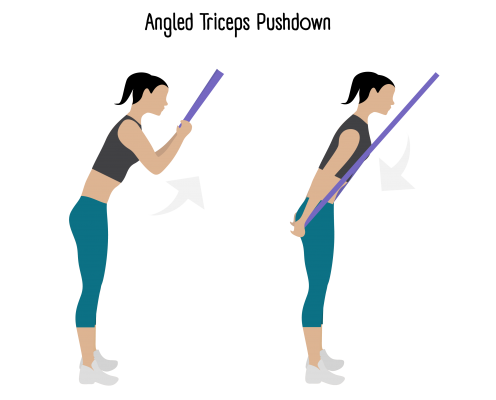 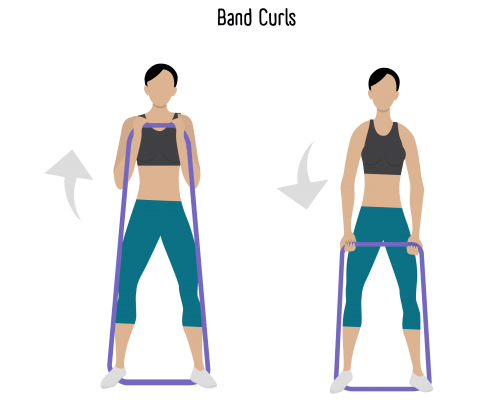 Anchor your band at about the height of your shoulders and stand away from the anchor point at a distance of a couple of feet. Grab the ends of the band with a neutral grip. Now bring your arms up to the back of your head with elbows bent.

Concentrate on forcing the elbows together as you raise your arms to a straightened position overhead. Imagine that you have a basketball between your elbows and have to keep it from falling.

Perform 20 reps and then immediately go to the preacher band curl. Using the same anchor point, face toward the anchor point and grab the band ends with an under grip. Stand back so that your arms are stretched out horizontally. Now curl the band up to your shoulders. Be sure to keep your elbows high as you do this exercise.

Follow the same set pattern as on your first super set. Remember to rest exactly 60 seconds between super sets, then do two sets of 10 reps with a heavier resistance band and finishing with a pump out set of 15 reps on each move. 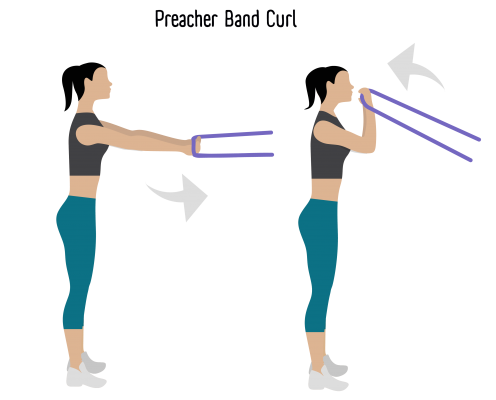 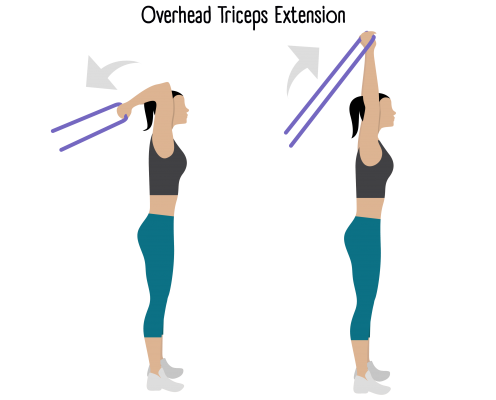 With our third super set we will be isolating the arms one at a time. The first move, the single arm band curl, focuses on the long head of the triceps to help bring out the peak of the muscle. Anchor the band at the level of your elbow and face away from the anchor point and about two feet in front of it. Grab the end of the band with a neutral grip (thumb up). You should be far enough away from the anchor point that the band is fully stretched and your straightened arm is reaching back with the hand about six-eight inches back of your body.

From this position, curl the band up to a full contraction. The only movement should be through the forearm (do not allow the elbow to travel forward). As you curl, supinate at the wrist so that your thumb goes to your side and your pinkie is on top. Squeeze the biceps for all they are worth in the top position.

Do 20 reps and then repeat with the other arm.

The second part of this super set has you doing the single arm pushdown. Set the band up with a high anchor point and stand side on to it. Grab the band with your outer arm and step out so that the band is taut when you are holding it at chest level with a bent arm.

Keeping your elbow in at your side and locked in position, straighten the arm down to full extension. Do 20 reps on each arm.

The same pattern of sets should be followed as with your previous supersets; 20 reps on the first set, then two sets of 10 with an increased resistance and a final pump out set of 15 reps. 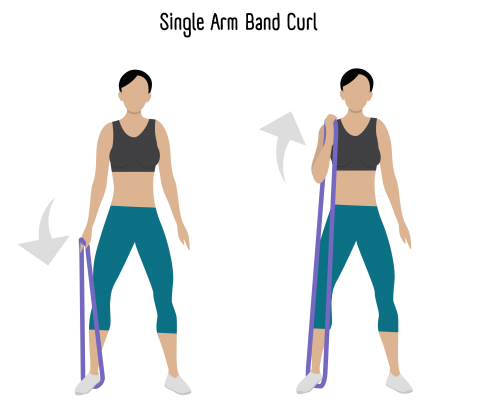 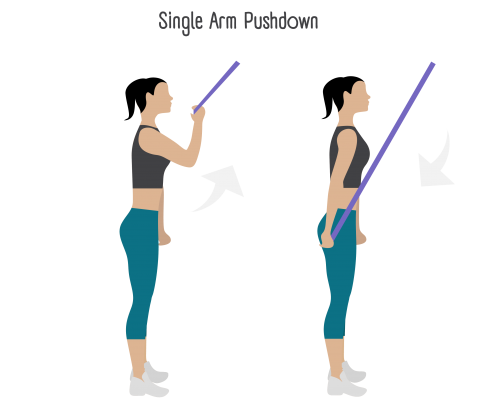 Perform this arm workout once per week as a stand-alone workout. Remember to work hard to increase your resistance week by week. This may involve going to a heavier band, but you can also change your distance from the anchor point and your grip position on the band to make the exercise harder. Just don’t sacrifice good form in the pursuit of added resistance.